Bamban –Sixteen  of the first Batch who undergo reformation in Bamban Bahay Pagbabago completed their one month stay of total reformation.

Early this quarter, Mayor Jose Antonio T. Feliciano opened Bamban Bahay Pagbabago in Dapdap Resettlement here and welcomed its first set of clients who are drug dependents.  The Reformation Center is one of the priority project of Mayor Feliciano as part of his advocacy to fight crimes in Bamban.

They were among the nearly 290    people who are included in the PNP watchlist  and who surrendered to the Bamban police after admitting using or selling illegal drugs.

Currently, after the graduation of the first Batch, there are 12 users of illegal drugs are now enrolled in the reformation center manned by the Bamban police. 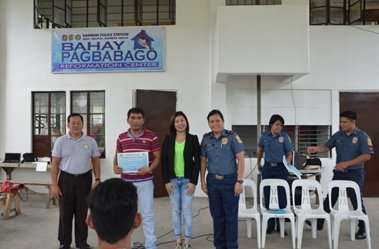 Copyright © 2020. Municipality of Bamban, Province of Tarlac. All rights reserved. Powered By: